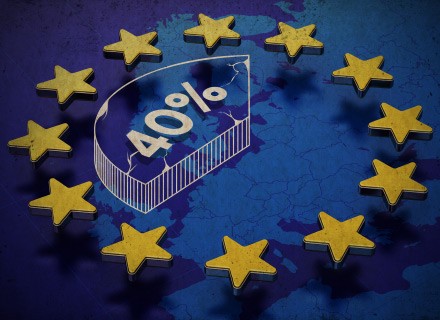 Crowdfunding markets around the world have seen remarkable growth rates in recent years. In fact, between 2010 and 2017, an aggregate amount of almost $50 billion has been raised worldwide through this method of financing, which falls into four specific types: debt, rewards, equity, and charity.

The first three are comparable to more traditional sources of funding, in that investors expect returns or other financial benefits, whereas charity crowdfunding acts on a purely philanthropic method. It is this debt-based method, which acts similarly to a traditional bank loan and tends to be peer-to-peer, that generates the most funding, totalling approximately $40.5 billion of the $50 billion pledged between 2010 and 2017 – a huge percentage of the market.

With this significant growth, it is no surprise that crowdfunding has attracted increasing economic, political, and regulatory attention at an international level. Currently, the crowdfunding market is dominated by both the US and the EU, raising $25.8 billion and $16.9 billion respectively between 2010 and 2017. Over this period of time, US growth has been at roughly an 80 percent rate, and the growth has been 85 percent in Europe – although this has slowed in recent years.

The EU has the highest number of crowdfunding platforms on the market, hosting just over 40 percent of platforms worldwide – which is of course extremely positive. However, the UK hosts a quarter of these platforms, and also raised 88 percent of Europe’s funds between 2010 and 2017 – making it by far the most dominant player on the European crowdfunding market, and not far off the US’ dominance worldwide. Other countries in the bloc act on a much smaller scale, with France, the Netherlands, Germany, and Italy, for instance, only making up 10 percent of crowdfunding raised within the EU.

Crowdfunding is a local source of finance

Crowdfunding is also predominantly a local source of finance. It tends to be the case that investors fund ventures in their own countries, due to the fact they feel more knowledgeable in home markets, considering the political environment, and regulatory issues. This has meant that there is little to no cross-border activity when it comes to crowdfunding, which could prove problematic with regards to the UK’s departure from the EU.

Considering the UK’s dominance in the European market, Brexit is likely to have a significant impact on the overall volume of crowdfunding expected in the EU. It is therefore important for EU nations that cross-border activity is encouraged, and they increase their percentage share of crowdfunding efforts both in the EU and worldwide. 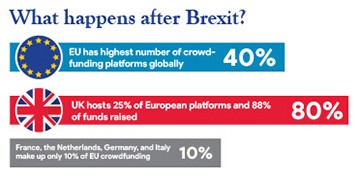 However, currently there is no clear and consistent regulatory framework in place in Europe on this type of funding. As operating under the supranational Markets in Financial Instruments Directive (MiFID) is perceived as being too burdensome, crowdfunding platforms mostly choose to obtain authorisation under national regulatory frameworks, which greatly impaired their cross-border activity and thus the overall development of the crowdfunding market. This did not change with the MiFID 2 framework implemented in January 2018, as it was still not specifically tailored towards the needs of crowdfunding platforms.

In March 2018, however, the European Commission proposed a new framework – Regulation on European Crowdfunding Service Providers (ECSP) – which would attempt to encourage cross-border activity and act as an exemption from the restrictive MiFID 2 regulation. This new set of measures is aimed at addressing the major shortcomings of the current regulatory framework, and employing an EU-wide regime instead of requiring investors to adopt domestic ones. If implemented, it looks to be a major step towards a more transparent and easily accessible Europe-wide market that would therefore minimise the administrative burden for investors while also strengthening investor protections.

Though this new framework does certainly move the EU in the right direction when it comes to the development of crowdfunding markets in Europe, it is not yet completely coherent. It is likely to still hinder cross-border activity and slow down the development of crowdfunding markets. In fact,in our research we identified three distinct shortcomings in the new regulatory framework that need addressing if we are to give maximum support to the concept of an EU-wide crowdfunding market, and provide startups and SMEs with much-needed access to this type of funding.

Firstly, this EU-wide framework needs to have a precise and transparent legal definition of crowdfunding activities. There has to be a common foundation in place so that there is no legal confusion for investors, enterprises, or platforms. The proposed framework does not have this, making it difficult for small, local firms who are seeking cross-border finance as they do not have an in-depth knowledge of legal regimes in multiple countries and therefore are unable find a financing model that best fits their needs. Creating a precise and transparent legal framework across the EU will ensure that all firms, no matter of their size, and investors understand the legalities of crowdfunding throughout the EU, not just in their origin countries.

Secondly, this framework requires a much clearer stance on investor protection. In the current proposal of the framework, if service providers do not see the investor to be particularly knowledgeable, they were obliged to issue a warning. However, this does not necessarily prevent an investor from funding a project.

Though this does reduce administrative tasks for providers, it is an extremely lax and unclear stance on investor protection. The framework must include a more refined requirement for agents who want to invest more than a certain threshold amount to undertake a ‘qualified investor test’. In doing so, it can be ensured that all investors who fund firms and their ventures through crowdfunding are fit and proper, and can prove they have the necessary knowledge and ability to participate in the crowdfunding market.

And thirdly, the current framework proposal is too limited as it only allows crowdfunding offers to a maximum of €1 million per project over a period of 12 months. Although currently only around 15 percent of all funded campaigns are above €1 million, their combined volume amounts to approximately 50 percent of the total funds pledged to EU campaigns. Therefore, the threshold is extremely restrictive and damaging to the potential growth of crowdfunding markets. This maximum quantity of investment should be raised to €5 million in order to enable the frictionless development of investment-based crowdfunding in Europe.

Overall, the proposed framework certainly introduces a solid foundation for an EU-wide regulation on crowdfunding, however it does not go far enough in facilitating effective cross-border activity, or providing a clear and transparent framework, which could lessen the administrative burden on investors. If the European Commission looks to address these shortcomings, then it is likely we shall see the European crowdfunding market grow further collectively.

Jörg Rocholl is President and Professor of Finance at the European School of Management and Technology Berlin. He is also the Ernst and Young Chair in Governance and Compliance and his research interests are in the areas of corporate finance, corporate governance, and financial intermediation. 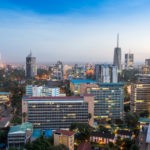 No respite for Canada’s oil and gas investors