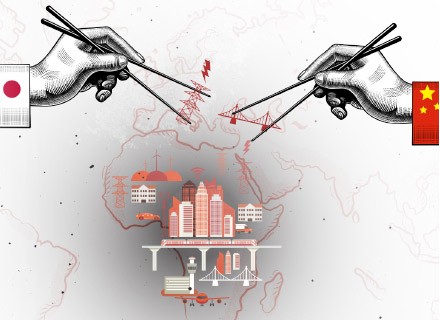 Japan is out to grab a piece of the Africa development pie — and China is displeased. What does this mean for the continent?

China has pursued a massive empire building effort in Africa through bilateral loans, trade, assistance, and foreign direct investments, strategically building its soft power and hard power in the continent. Where western corporations and governments would think twice before entering, China has moved in swiftly to build a solid base of political support and economic benefits for itself. China has capitalised on the lack of western involvement by aggressively pushing on with new infrastructure projects such as the Belt and Road initiative, for which 37 African countries have pledged to join.

This way, the Chinese have already paved the path to assert their influence on the Africa’s development — the continent where half of the world’s population will reside at the turn of the next century.

If China is having a civilisation shaping influence on Africa, can its civilisational rival Japan be far behind? Japan is slowly making its mark on Africa’s development to counter the Chinese influence on the continent, through similar deals and assistance. For decades, African countries have sought the help of the US, the UK, France, and the multilateral institutions like the World Bank and the International Monetary Fund to finance their infrastructure deficits. But what’s fascinating today is that China has superseded those countries in establishing goodwill on the continent in a much shorter time span. A decade ago, China ousted the United States as Africa’s largest trading partner.

Integrated approach the only way

If Japan had to counter China’s influence in Africa, it had to embark on the journey with an integrated approach like China. In 2016, the Japanese Prime Minister Shinzo Abe pledged $30 billion during the fourth Tokyo International Conference on African Development (TICAD). The pledge included $10 billion for infrastructure projects carried out in cooperation with the African Development Bank.

Japan has transformed the TICAD framework from basic government assistance programmes to private sector-focused activities such as trade and investment. With that, its approach to cooperation with Africa has become of more or less similar to China’s.

The Japanese government recently announced that it will establish a permanent joint council this year to link the government and the private sectors to coordinate Japanese investments in Africa. The council will comprise government officials, economic organisations, and Japanese companies operating in the African countries.

The council will hold two or three meetings each year, with the foreign minister, the trade and industry minister, and a business industry representative serving as joint chairpersons.

The Japanese involvement in Africa has already  politicised its relations with China and Africa. To Beijing, the possibility of Japan building high-quality infrastructure at a similar cost is a cause for concern. The Chinese Ministry of Foreign Affairs accused Japan’s outreach efforts as an attempt to ‘feed conflict’ between China and the African countries.

Currently, there are more than 440 Japanese companies operating in Africa. Engineering companies including JGC are establishing plants in Nigeria, while Mitsubishi Electric and chemical company AGC have opened sales offices in South Africa and Morocco.

China’s long-time influence on the continent has led to the commonly held belief that it is the more dominant partner of African nations than Japan. Even though Japan is lagging behind China in its engagement with Africa in numerical terms, the Japan International Cooperation Agency (JICA), which manages the country’s overseas assistance, has in fact provided aid for some of the most crucial infrastructure projects — and these involvements remain low key.

For example, the JICA has provided assistance for the critical Tanzania-Zambia railway flyover bridge, and the construction of the Mwenge-Morocco highway. It has also signed a $112 million loan for assisting in infrastructural development around the Port of Mombasa in Kenya.

The question now is whose influence on Africa is overall positive for Africa? Japan or China?

Scholars from Stanford University who studied Chinese investments in Africa from 1991 to 2000 found that Chinese investments are not often complemented with economic growth. Cheaper Chinese imports, for instance, have hurt small African local manufacturers leading to loss of employment opportunities. Unlike Europe and the United States, China often acts favourably to countries isolated by others for political reasons because it prioritises geopolitical interests over western concerns such as human rights. 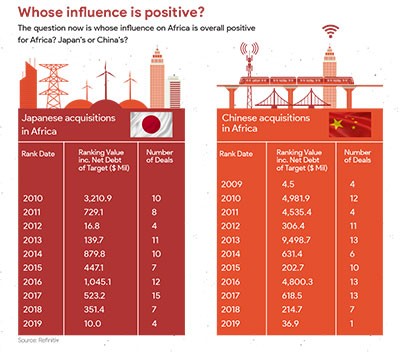 The eagerness of African leaders to pursue loan deals with Africa and the Chinese eagerness to indulge African nations with loans continues unabated. When Nigeria’s President Muhammadu Buhari attended the Forum on China and Africa Cooperation in Beijing last year, he pursued an additional $6 billion in infrastructure loans from the Chinese state banks.At the summit, China’s President Xi Jingping also pledged $60 billion fordevelopment in Africa.

Most of the financing that African nations receive from China is in the form of loans. Chinese companies are also encouraged to invest in African projects. The outcome may not always be positive for the loan recipients.

At times African nations have withdrawn from or cancelled deals with China. President of Sierra Leone Julius Maada Bio, who took office in April, cancelled a deal for China to build a new $400 million international airport at Mamamah. The deal was previously signed by his predecessor, but now the government is considering innovating the current international airport citing that the project is ‘uneconomical’. The decision to cancel the project also stems from the World Bank’s warnings that it could potentially increase Africa’s debt burden.

There is also a sense of fear that Kenya could risk losing the Port of Mombasa to the Chinese if the Kenya Railways Corporation (KRC) defaults payments to Exim Bank. KRC accepted the $2.3 billion loan with an agreement that the authority’s revenue will be used to clear the debt owed to China’s Exim bank. The fate of Sri Lanka’s Hamabantota Port hangs over the Mombasa port. China insists that any future dispute in the KRC project will be handled through an arbitration process in its own courts. This shows the inordinate leverage that China exerts on African nations.

Western media have raised allegations that China’s loans to African nations are leading them to a debt trap and that China is clandestinely picking up assets in Africa cheaply.

Despite that, Chinese companies have emerged as top competitors in the African market. Between September and October 2018, the Japan External Trade Organisation carried out a survey on Japanese-affiliated companies and their business operations in 24 African countries.

According to the survey’s key findings, Chinese companies climbed the top ranks for the first time as competitors in the African market. That said, the survey also showed that 76 percent of companies in Africa desire firm support from the Japanese government.

That said, the Government of Japan during TICAD VI promised to bolster the initiatives taken by African countries which will help to reinforce development across the continent. Also, several Japanese companies have shown significant interest in African markets. For example, last year Daikin Industries planned its business expansion in Africa and also considered a new Indian plant to produce products for the continent.

Japan hopes to become Africa’s single most valuable trade partner. The country has said that it plans to link Africa with Asia and include it in the Free and Open Indo Pacific Strategy. At the opening session of TICAD VI, Prime Minister Shinzo Abe said that Japan intends to foster peace and prosperity in the international community. “It is my wish that the self-confidence and sense of responsibility spawned there as a result come to envelop the entirety of Africa together with the gentle winds that blow here,” Abe said.

To this end, Japan and India are slowly investing efforts to create a joint program—theAsia-Africa Growth Corridor—which pledges to bring real benefits to Africa.

The plan has already led to conflict warnings from China. Chinese tabloid the Global Times warned: “If India and Japan design the corridor to deliberately counterbalance China’s BRI, they should think twice before rushing into it.”

But this is not to say that Japan’s interest inAfrica is purely selfless. Japan’s poor natural resources have encouraged it tobecome heavily reliant on the international markets. For the same reason, Japan’s Official Development Assistance (ODA) is focused on select African countries with abundant sources of raw materials.

With that, the continent has only become a political playing field for both China and Japan to play out a historic rivalry. 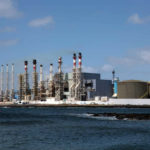 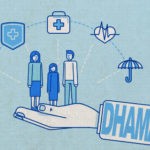 Why the Oman government introduced Dhamani